Happy New Year to all! Wishing you all the best of wishes for good health, peace and inspiration in the studio for the coming year. We’re closing out the year by welcoming 68 new artists to the site so lots of juice and excitement on pages 28, 29 and 30. Here are a few to pique your interest… 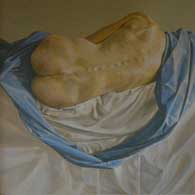 Peter Mallison, lovely subtle nudes
The figures are created with a subtle modulation of colour across their forms and shaped with surrounding areas of lucid tones which weld the human form into an overall unity. The effect is towards the body abstracted into a completely aesthetic form. 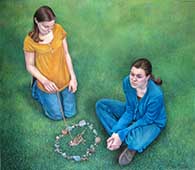 Andrew Ameral
After years of living in Florence, Andrew has finally returned home to California. He paints and teaches at a private studio in the Bay Area. Andrew has received awards for his figure drawings including scholarships from the Art Renewal Center and the Stacey Foundation. He has a number of paintings and drawings that are privately owned in Europe and the United States.

Beth Carter, gutsy sculpture
My work creates a rich allegorical world by integrating the human figure with animal form. I work within the realm of a sculptural tradition where the symbolic use of animal imagery has been a continuously potent source, I seek a new level of inquiry into these timeless themes, and in this sense my work is flavored by a mythological and classical aesthetic. 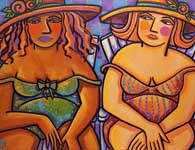 Ilene Richard, colorful paintings and illustrations
My figurative work is based on my observations of people involved in everyday activities. Whether it be the interaction of a couple dancing or a group of strangers standing next to each other in a crowded room.  I create an emotional connection for not only the viewer, but also between the people depicted in my work.  Working as a children’s book illustrator and painter, it is important to me to create a narrative quality to my work, and draw the viewer more easily into my world.

Her latest projects are “The American Portrait Project” which she is painting pastel portraits of American’s to show the diversity in the U.S., “Gothic South”, a collection of photograph’s of southern architecture from decaying Antebellum plantation homes to abandoned cotton mills, illustrating Edgar Allan Poe and H. P. Lovecraft’s works and “Altered” a graphic novel about Jack the Ripper and the Whitechapel Murders. Hampton is a Masters Circle Member of the International Association of Pastel Societies, earning her Gold Medal in the Spring of 2007, a Signature Member of the Pastel Society of America, the Southeastern Pastel Society and the Alabama Pastel Society.

Cynthia Mackert
Artist Cynthia Markert has been creating her mixed media paintings on wood since graduation from the University of Tennessee with a major in Studio Art and a minor in Women’s Studies. Her biographies appear in Who’s Who in America and Who’s Who In American Women. Her work is included in the archives of the National Museum of Women in the Arts in Washington D.C.

In the darkness when grief gently taps me on the shoulder…in the early morning when the sunrise fills me with hope….when music plays and causes my soul to dance. It is at these times that I stop thinking in words and my mind is filled with images. The strongest of these images will keep returning to me and nagging me until I discover how it might become manifest in clay.

I plan the piece in my head and make many sketches, but I don’t touch the clay until I can feel what I want. When I’m clear about what that is, I pick up my rolling pin and start working the clay into a slab. I tear away large swaths only to add them back again as I keep rolling. When the slab has taken on a certain energy, I begin constructing. As I stretch and compress the clay, it is as though it has come to life. The surface of the slab becomes the very human-like surface of the sculpture.  After much wrestling, the clay and I come to an agreement. I don’t work traditionally because I want preserve the spontaneity of form that encourages the unexpected. With clay slabs, the unexpected is my constant companion. 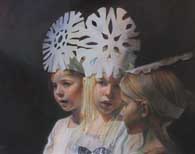 Sophie Ploeg
Born and bred in The Netherlands Sophie moved to the United Kingdom 12 years ago. She attended a Dutch College of Art to study Theatre Design before moving on to university to study art and architectural history. After her university years she took up painting full time. In her work she explores portraits, figures and fabrics; she relishes in portraying the textures of different surfaces and materials. Her work oozes mood and depth. She works in oils and pastel and regularly takes on portrait commissions.

Hand and machine stitch is used as a means of mark-making to produce work that is usually figurative, and built up in layers; of time, of thought, of fabric, and of stitch. Often displaying a slightly surreal sense of humour, my work challenges both identity and preconception whilst ‘at first glance’ appearing homely and domestic.

I enjoy the ‘out of place’, the unexpected, the bizarre and am an avid photographer who makes a constant visual record as an ‘aide-mémoire’ both at home and on my travels. Combining the real, the imagined, the remembered, and sometimes the nonsensical, I give content precedence over technique, which I keep simple and straightforward.

Tania Wursig
Australian painter with a theatrical flair for costume and drama. 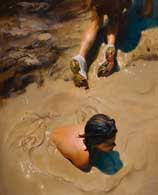 Teresa Elliot, dramatic paintings, portraits and incredible Texas longhorn bull portraits
Primarily self taught, Elliott is perhaps best known for her extensive group of Texas longhorn oil paintings which are included in corporate and private collections across the United States, Canada and Australia. She has been selected to exhibit in many invitational museums shows nationwide winning awards in Colorado, Texas and Arizona. Her work is represented in galleries in Fredericksburg, TX, Santa Fe, NM and Jackson Hole, WY where she has had several individual and group shows.