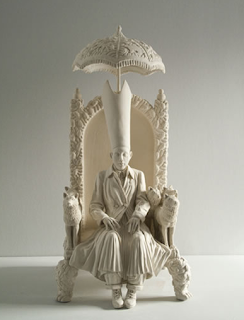 This body of work is an ode to the Animal, its ability to perceive, and our return to that perception. An animal is its very form. Its function is its form. A dog runs at full speed, a distinct scent or sound alters its direction. The legs, the nose, the ears of the dog are its function, its bliss. When an animal recognizes another animal it reads with an instinctual eye the character in the form- the essential nature in the form before it. Its text is not a concept about what it’s looking at but a full-bodied response to the shape, smell, movement, and stance of the image in front of it. The language of animals is the language of images. An image is not an idea with a defined meaning, it is itself an animal. This is the ode-to reconnect with our own animal perception is to clarify and heighten our perception of who and what we are in the moment… to go beyond the limited mental concepts of who we think we are… to an awareness of oneself that is infinitely more vast. The Exiles migrate between the human world and the animal world and carry this awareness on their backs. They are the silent embodiment of this Quest. They understand the language of animals and are self-appointed ambassadors from that world. They are firmly seated, in the language of animals, the language of imagery. They have succeeded by virtue of being.

The work from Exiles in Lower Utopia overlaps in images and characters with Toc Fetch’s series of images done in pencil on paper, Kids of Lower Utopia.
Tricia Cline