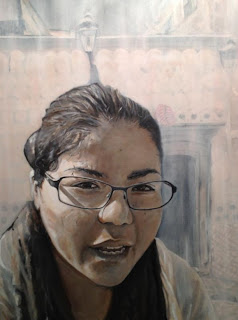 A Portrait of Power

This is my  most recent piece of my good friend Mayra. Mayra & I met in Sonoma California, where we shared an office for almost six months. I was and continue to be in awe of her power and her spirit. Without going into great detail, Mayra grew up supported by a single mom and helped  raise her brother, (now in high school.) The love and the care that Mayra gives to others daily is truly inspirational.

As I am continuing my recent fairytale theme, and as I got to know Mayra better, the image of her holding her brothers hand lost in the woods and looking for bread crumbs began to surface…go figure. I initially began working on this for a black & white show in Santa Cruz California, but as I continued to paint this, Mayra’s image demanded that I paint her in sepia, to honor her Mexican roots. And instead of painting a gingerbread house in the woods with a witch, I found her in a Mexican city and instead of gingerbread the building is made of yellow and pink conchas.

In the original Grimm fairytale “Hansel & Gretal” there was so much symbolism surrounding the kids father that couldn’t bear to abandon his kids in the dark forest and the witch that tried to lure the kids to their death, and although I’m not sure how, but the symbolism in this portrait could follow some similarities. Mayra & I worked together for only a short time, she went back to school in January and is now studying to become a nurse.

We should all be so lucky to follow the bread crumbs of this amazing woman and catch a bite before the birds carry them away.
Tom Montan