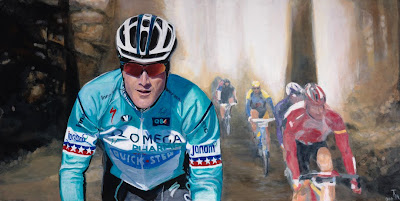 Amidst the sea of mass produced marketing messages and the usual excitement surrounding a race that is the magnitude of the Amgen 2012 tour of California there sits atop a building just behind center stage, an original portrait of home town cycling hero Levi Leipheimer.

Sonoma County artist Tom Montan has just completed his larger than life portrait of internationally renowned cyclist Levi Leipheimer and will be on display adjacent to Stage one’s finish line of Amgen’s 2012 Tour of California, on top of the office building at 1 Santa Rosa Avenue in downtown Santa Rosa California.

The piece titled “the billboard” began as a part of the City of Santa Rosa’s “Art billboard project” that brought some of Santa Rosa’s finest art talent out into the light with a series of billboards throughout Santa Rosa. Mr. Montan’s piece had such a resonance with the upcoming Amgen race that local magazine and promoter BIKE MONKEY, purchased the piece and helped secure a prominent location at Stage one’s finish line.

This piece measuring eight feet by four feet was the first time that artist Montan had worked in Acrylic’s. “Doing a piece of this size and for this type of event has been such an honor and I had a blast. The one-month turn around was invigorating and I continue to be inspired by all that these cyclists do. ”

Tom has lived and worked in Sonoma County for the last 30 years. His earlier sculpture work has gained local recognition and sparked some controversy, notably, as part of team of artists that created “the Door” sculpture in Sebastopol, California in 1999. He has been singularly focused in recent months on large-scale portraits. The “the billboard” is a departure for him as he has mixed both the techniques of hyper-realism and abstract painting in a very large format.

This painting is on display on the building at 1 Santa Rosa Avenue in Santa Rosa California, at the Corner of 3rd and Mendocino. The painting will be up through the end of May, and will then be part of the fundraising efforts of Levi’s Gran Fondo.

For further information about Tom Montan’s piece please visit his website at http://www.thepaintingis.com