July 23, 2013 | figurative painting | No Comments
A few months ago I was approached by Mural Mosaic to participate in a large art installation project. Of course my first reaction was to be a bit suspicious but after checking out their web site and seeing some familiar names on the previous art projects I agreed to participate.
Here’s what figurative artist Heather Brewster says about her involvement in an earlier project:
“Without any hesitation, the guys from Mural Mosaic are great. I know them personally.
I would jump at the chance to do any work with them…..and you would be smart to link to them.
I have received much attention from the work I have done with them.They have big hearts, and have supported me through thick and thin… sickness and health.I can’t say enough good things about them.” Heather 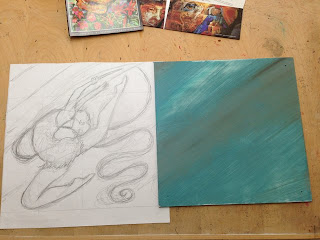 The theme for this large mosaic piece is “sports” and the piece will be unveiled in Sherbrooke, Quebec in August 2013. A total of 223 panels, each 16 by 16 inches, will create one large image on the theme of sports and each panel within the large piece is its own separate painting on the theme of sports. I received my panel #137 above with the blues and rosey streaks painted onto it already as an undercoat. My instructions were to completely cover the panel but follow the general color information.
I chose rhythmic gymnastics as my sport and spent some time perfecting my drawing so that it would fit within the confines on the panel as there would be no second chance. I had put away my acrylic paints a few years ago in favor of oil paints but we were obliged to create our panels in 100% acyclic paints so I pulled them out of storage and put them to use here. I created almost all of my panel with a palette knife and added only a few licks with a brush for the final top layer. 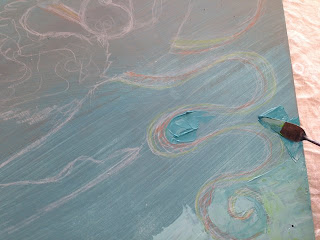 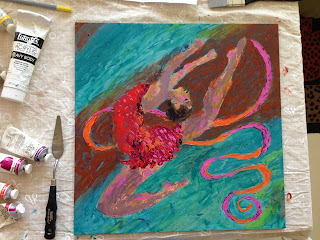 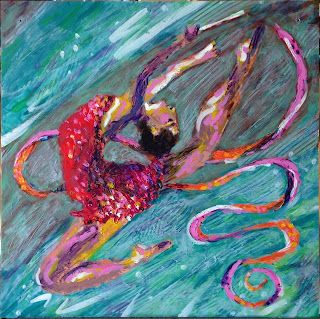 We can see the final image coming together here but will have to wait for the final unveiling in August to see the entire image. I see some other fine artists from FigurativeArtist.org group in this lineup:
Igor Postash, Autumn Skye Morrison, Phillip Buller, Heather Brewster, Kai McCall, Juan Martinez, Steve Adams, Andrew Benyei, and myself Paula O’Brien.
We’ll post the final mural when it’s completed. Meanwhile good luck and get going to any artists who have not yet completed their panels and mailed them back to the team. Cheers all! A great project!