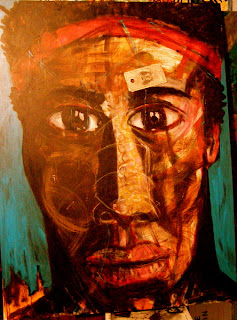 Mikel Elam, local Philly artist, was attacked and nearly beaten to death by flash mob. He has a long road to recovery & medical bills. Please click here to donate to Mikel: https://www.paypal.com/cgi-bin/webscr?cmd=_s-xclick&hosted_button_id=H5W52STH47B8E

Friends around the world have been shocked to learn that Mikel Elam, a very gentle soul was nearly beaten to death by a large group of teens. Mikel Elam, local to Philadelphia, an amazing Artist, our sweet Friend, and such a kind person to anyone whom you would ask and knows him, was attacked by a mob of 30 or more teenagers on his way home from work in his own neighborhood.

Mikel encountered a mob of young teens on the sidewalk. After an unsuccessful attempt to get out of their way, he had to walk through the crowd and was struck on the back of his head so severely that he passed out and suffered a concussion. Helpless and passed out lying on the sidewalk, he was then kicked repeatedly in his face and body until the mob ran off. A witness called 911 and Police and an Ambulance arrived to take him to a hospital. There was blood everywhere at the scene.

Mikel was left with serious injuries, including a broken jawbone and bleeding in his brain. His mouth has been wired shut, he is unable to talk and or even walk. He is not only emotionally shaken by this tragedy, but he has also been rendered physically incapable of working, left with huge Hospital Bills he cannot pay and the fear of losing his very needed job. His recovery time is estimated at one month for now. This is an incredible tragedy and such a senseless crime.

Please help us raise money for Mikel by donating through PayPal. https://www.paypal.com/cgi-bin/webscr?cmd=_s-xclick&hosted_button_id=H5W52STH47B8E  All money is donated through PayPal and goes directly to Mikel to help pay for medical bills & expenses.