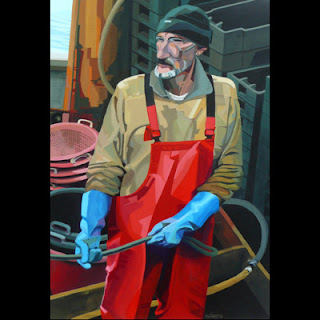 How do you begin?
It starts with looking. Regardless of what I’m doing or where I am. Being aware of what is going on, observing the world around me. Noting shapes, colors, light and shade, structure. Things that attract my visual attention. I keep a notebook with me usually and a camera. 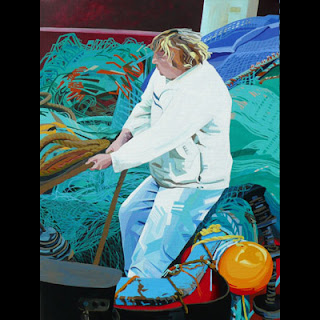 What about ideas?
I used to be an illustrator and as such my work was about adding clarity and information to expand on a given text. To do this you need to be able to define an idea or concept which will add more to the perception of the text rather than just describing in visual forms what the author is saying. In essence you become a problem solver.

When I reached an age and state where I no longer wanted to work entirely at the behest of other people, I started by applying the same criteria to myself. I became my own client. It was hard defining what I wanted to say. I was living in a completely different environment, small town in Devon as opposed to west London and I was bombarded by the differences. The landscape of course but I have always been interested in people and this is my preferred subject matter. As an illustrator most of my work revolved around the depiction of people and animals, historically and in the present day for fiction and non fiction. It seemed natural then to transfer this interest to my new surroundings.

I didn’t know many people and it was not easy finding models and workspace, so I took myself outside and started to explore the locale and, discovered sheep. No they don’t keep still while you try to draw them, but if you can fool them into ignoring you (they are both skittish and inquisitive) and you start to look, their stance, character, interaction with others and in the landscape, breeding variations in shape and color, the way they look at you, became a wonderful subject matter.

So you started painting sheep?
Yes, well drawing actually. Out at Stoke Fleming which is about 3 miles from Dartmouth where I live, there are a set of fields on the high cliffs with the sea below. I was there one day watching the newly shorn sheep grazing. As with a lot of south Devon, the hillsides and cliffs are very steep and as a poor walker and townie it seemed amazing to see how well they coped. Four legs help of course. But it was the light, so intense, bouncing off the water with deep pools of shade where the sheep gathered to get out of the heat at midday that really got me started. I drew, took some photographs as backup and came home to work.

Don’t you paint outside?
No. I don’t see well enough any more and besides, years as an illustrator meant that I worked at a desk and this has become a habit. I’m not a fast painter, I use paint tightly in defined areas and this takes time. I don’t like the texture of paint when I’m using it. It has to be smooth, flat almost as though it were printed! I’ll quickly lay color if roughing something out but prefer to structure the image. Depth within the painting is given by analysis of color and light, by breaking down the shapes that I see into pattern, it seems to work.

So did you make a series of sheep paintings?
Yes and it’s ongoing though I am now looking at other subjects as well.

Yes, I suppose once you’ve seen one sheep you’ve seen them all.
No way! Well I don’t expect everybody to recognize their charms, but they are really interesting as subject matter. Have you ever looked at the different textures of wool. Some sheep have really thick, dense fleeces others are silky looking with incredible depth of color. I like to see how they reflect the colors around them so that they sometimes appear blue or green. Their faces too, so different from breed to breed (I particularly like the Blue Faced Leicester, they have wonderfully patrician noses).

Are you talking about portraits then?
I suppose so, I think they are a worthy subject, and after all people have had their animals painted for centuries. I’m just following a long tradition. 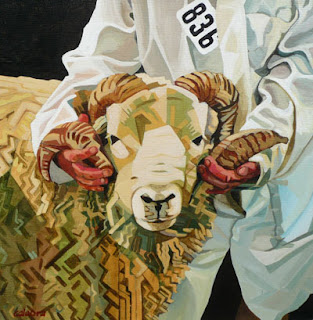 Showing no 836
In the summer there are the agricultural shows. I love going to them to see all the different breeds of sheep and to watch them being judged. There is enormous pride shown by the handlers, quite justified in my view. 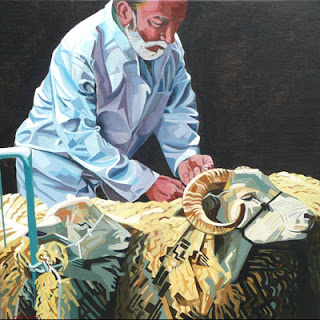 Tethered
Based on observations at the Devon County Show. I was particularly interested in the way light played across the white coats of the workers (managed to use a model for the handler) and the way they contrasted with patterns and colors of the sheep. 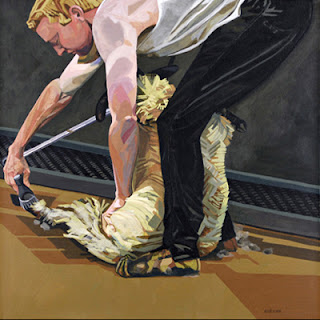 Shearing
Speed and skill are required to shear well. I wanted to explore the energy of both shearer and sheep.