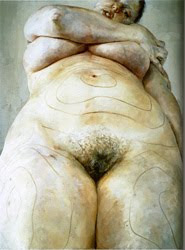 Here’s a very interesting article about an important British artist Jenny Saville. I have never found her own website but here are links that will share her powerful body of work on bodies. If anyone knows of her own website, please drop me a line. Justin Ogilvie first introduced me to her stunning work about 5 years ago.

Excellent long article in Guardian UK by Rachel Cooke
“Jenny Saville: ‘I want to be a painter of modern life, and modern bodies’ Jenny Saville’s nudes are firmly in the vein of Lucian Freud, yet only now is she having her first major British solo show.

I have a low-level dread of artists’ studios, which tend to be full to overflowing with the (to me) highly distressing detritus of creativity: encrusted paint; cruelly abandoned canvases; ghostly dustsheets. But I find that I can just about cope with Jenny Saville‘s work space, which is in a shabby office building in Oxford, owned by Pembroke College……”

“Jenny Saville’s disturbingly massive nudes made her a sensation among Young British Artists. Yet, for a painter regularly described as the heir to Lucian Freud, it has taken a surprisingly long time to be given a solo show in the UK

Jenny Saville is at Modern Art Oxford and the Ashmolean Museum, Oxford, from 23 June to 16 September”

Areas of Flesh by David Sylvester
Originally published in The Independent, January 20, 1994