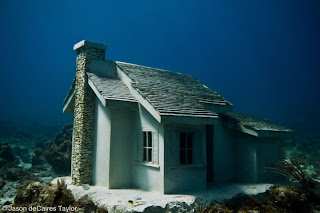 Urban Reef
MUSA Collection. Cancun/Isla Mujeres, Depth 8m
A new series of sculptures have now been added to the MUSA collection entitled Urban Reef, they depict a series of suburban dwellings specifically designed to house individual marine species. Working with local marine biologists the units are designed with a variety of rooms, spaces, hideaways and textures all tailored for different reef inhabitants. Located on an open stretch of terrain the houses also offer a place of shelter and refuge from reef predators such as Barracudas and Lion Fish. 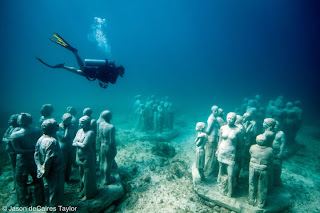 The Silent Evolution
MUSA Collection. Cancun/Isla Mujeres, Depth 8m
Another 50 figurative pieces have been added to The Silent Evolution installation on the Manchones reef system between Cancun and Isla Mujeres. The entire artwork now stands at 450 sculptures which have been installed incrementally to inform visitors on the various stages of reef evolution. The new portraits cast from local members of the community aim to depict the integral symbiosis and dependency of humans on nature.

New Film
Forming part of the recent show at the Jonathan Levine Gallery the film Human Nature is now available to view online. The 5min video documents a visual timeline from the oldest most developed pieces right up to the most recently deployed Phoenix sculpture and uses new Macro photography with the latest lenses supplied by Sigma. The film also includes a beautiful sound track by the composer Philip Guyler.

Works in progress
The Holy man sculpture which was deployed and propagated with Staghorn coral 1 year ago has shown prolific coral growth after such a short period of time and recent high sea temperatures. 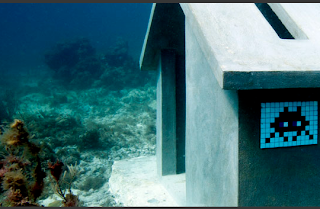 Finally The first ever underwater urban tagging has occurred on one of the new underwater houses in Urban reef created by the notorious French graffiti artist Invader.

Jason’s film and photography is bought to you in partership with Sigma Lenses.
Jason deCaires Taylor