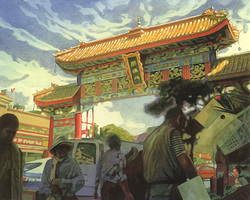 Canada Post has released a new series of postage stamps for 2013. This series features the various Chinatown gates from across Canada. Artists from each city were selected to present impressions of the their Chinatown’s gate. Mark Heine was selected for Victoria BC. It’s the 18th postage stamp to feature Mark Heine’s art.

“I often visit our Chinatown. For me it’s in the centre of Victoria. Most of the stores I frequent are within a few blocks. My strongest impressions were always of the exotic food markets, colourful stores and terrific restaurants. When I received word of this commission, I picked up my camera and went downtown to photograph the gate. I was a bit frustrated at first. There was so much going on… so many people and vehicles were blocking my view. At that time, the concept for this design came to me. The Gate Of Harmonious Interest is depicted here as the heart of Chinatown, representing culture and ancestry, but it’s the people that are the life-blood of Chinatown Victoria.”
Mark Heine